How does free shipping sound to you?

We'll be closing our store next week while we take some time off.  So we want to offer you a deal today.  Free shipping for USA addresses on all jade bangle bracelets! 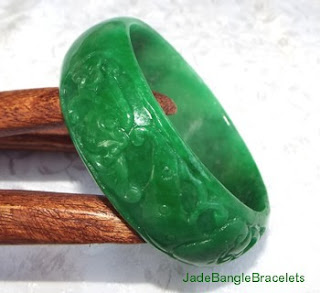 Posted by Jade Bangle Bracelets at 10:50 AM 2 comments:

I kept nagging the tour guide to take us to a jade bangle store, and he promised to after our Chinese medicine classes.  But, I just had to have one, now!    So on my way to a restroom after lunch, I saw a woman selling jade bangle bracelets, and bought one that looked just perfect, and priced very low. 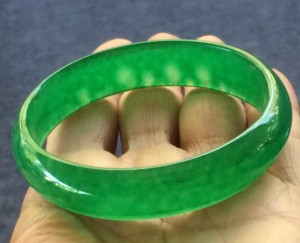 That seller was a classic tourist seller, and when the tour guide saw what I bought, he changed the plans for the afternoon and took us to a jade store.  Where I bought my second jade bangle bracelet.

I loved the color of the green translucent "jade" bangle in the photo, but at the time I had never touched jade, and didn't know what it should feel like.  And the Chinese medicine education was really teaching me about qi energy.  Touching genuine jade was a life changing experience for me.  And I combined my learning Chinese medicine with learning about jade.  Daoism is the basis of Chinese medicine, yin and yang, feng shui, so jade and Chinese medicine are partners.

The "jade" bangle I first purchased, in the  photo, wasn't jade.  It was quartz.  And color treated.  But I have kept it, and enjoy it.  And it makes me happy when I touch it because of the experience of getting to know about jade bangle bracelets.


Posted by Jade Bangle Bracelets at 6:57 AM 2 comments:

Clever jade carvers in Shanghai, southern China and Hong Kong started making the larger sizes for western women, but knowing "foreigners" didn't understand the qi gemology of jadeite, used lower quality or even fake jade to make these kinds of jade bangles.  They weren't as "pretty" as the expensive high quality jadeite for Chinese women sizes, which would be very expensive if that same high quality of jadeite were used to make these larger sizes.  What many people don't know is that the true imperial old mine jadeite is very precious and expensive.  Jade carvers "gamble" on a rough jade stone, seeing only a small window cut into the jade boulder to know what's actually inside: imperial jade, or colorless cloudy no-color jadeite stone.  So jade carvers used their "gambling losses" of poor quality jadeite boulder to make these larger size jade bangles for "foreigners".  They bleach the jade stone with acid to remove all the spots, odd colors and then impregnate with artificial coloring to make it look "like the real thing", maybe even more pretty.  Keep in mind that gemologists have color enhanced gemstones for years, including diamonds, rubies, emeralds and many other gemstones to enhance their color, so color treating process is acceptable practice with any gemstones.

What's not acceptable practice is not being honest about describing the color enhancements.  And making fake certificates of authenticity to give to the customer.

Soon the color enhanced jade bangles were the kind of jade bangle bracelets that were being sold to foreigners, regardless of size.  If you are a China visitor, and go shopping where the locals shop, you had a better chance of getting a natural color jade bangle, but not in the larger sizes, especially larger than 60mm.


The carved jade bangle in the photo is a large size 68.5mm.  It's carved with the "yang" design of man protecting woman, a larger fish next to a smaller peach (symbol of woman).
The yang deeper green vein with the yin lighter green also indicates it was made for male.
It was sold to us with certification of being natural color, genuine jadeite.  I took it to my jeweler who is a GIA gemologist who thought it was natural color, but offered to send it to the Carlsbad, California GIA gemology testing office for $200 to cover the cost of testing and shipping.  His opinion was it doesn't matter if it's natural or color treated because it's so pretty, rare to find this nice quality in larger sizes. And the prices we sell the larger sizes he thinks are extremely reasonable.  He is surprised to see that larger sizes we sell because he knows that large is rare.  And we did test it to make sure it's genuine jadeite, so it's not "fake jade".   He also showed me that most of the colored gemstones in jewelry he had at the counter are also heat treated to improve the color, but there are no "certificates" to show they are not natural color, just the disclaimer jewelry sellers use to state that it's common practice to enhance color.

So why all the drama around jade?  People who claim B and C grade is not real jade?
Part of the reason is the Chinese seller culture of fakes, knockoffs, and fraud.  As a jade seller, it's difficult to believe the jade I purchased as genuine, natural color, really is.  I've seen jade sellers in China shuffling a large stack of fake certificates they give to customers when they purchase jade in the jade markets.  When we take the photos, we also test each jade bangle with refraction to make sure it's jadeite.  Then it's a gamble, like in China.

Unless we purchase them directly from the jade carver while shopping in China, having tea with them and their family, and spending hours talking with them and making the best deal on jade bangle bracelets that benefits all of us.

Posted by Jade Bangle Bracelets at 6:39 AM No comments: